Ten things to do in Pokhara on a budget Volunteering in Nepal means working hard to make a positive contribution to the well-being of the local community. But the best volunteer abroad trips make having fun and finding adventure part of the program too!

Nepal is studded with jagged mountain peaks, dotted with placid lakes, and drenched in opportunities to find adventure. Pokhara is one of the best places to visit to experience Nepal, and these ten things to do in Pokhara on a budget offer an epic travel experience.

The top ten things to do in Pokhara 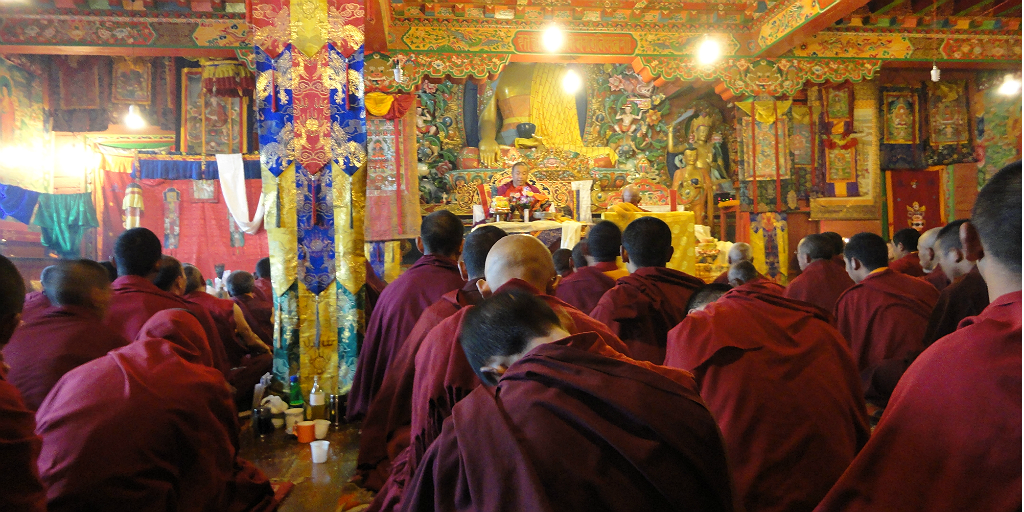 One of the best ways to learn more about Nepal is by getting to know more about its culture. Hinduism and Buddhism are the major religions in Pokhara and there are a number of religious structures in this city that can give travellers insight into the past and present of Nepal.

Further reading: Five things to know before you visit Nepal

If early mornings don’t phase you, you could experience the culture first-hand by travelling to the Matepani Buddhist Monastery perched on the slope of a hill in Pokhara. Here tourists can observe the early-morning practices of Buddhist monks, which include chanting, trumpet and drum playing.

Time it just right and you could arrive in time to watch the sunrise over the city, and even grab a bite to eat at a local eatery.

2) Tuck in at a local eatery

As one of the biggest cities in Nepal, Pokhara has no shortage of food establishments where you can get a taste for Nepalese food. But it’s the small family-run restaurants – offering local and traditional Nepali delicacies – that will give you a real peek into the food culture of Pokhara, at a much lower price than tourist-centred spots.

Ask around about what goes into traditional Pokhareli food and you’ll start to see how this cuisine is big on seasonal ingredients as well as local staples – like dhendo, which is produced when flour is boiled in water.

From fragrant steamed dumplings – known as momos – to fried fish fresh from the Phewa Lake, there are tons of dishes available that will tell your taste buds all they need to know about Nepalese cuisine.

And once you’ve eaten your fill, there are some excellent ways to walk off the calories. 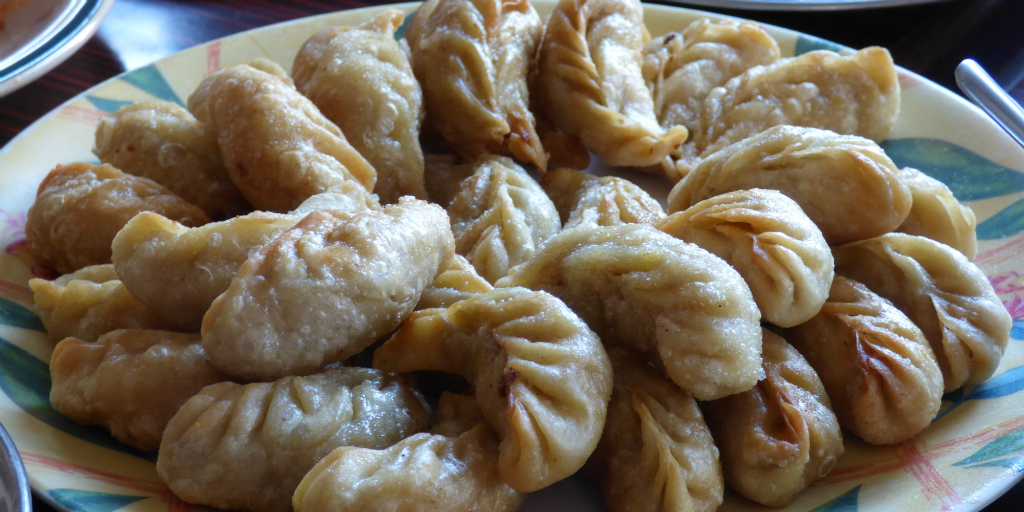 3) Hike the peaks of Pokhara

Walking is a great way to explore the city and get to know the local people too.

Pokhara is known as the gateway to the Annapurna Circuit – a popular hiking trail on the Himalayan mountain range. There are plenty of trails to choose from that will have you experiencing the sights and sounds of this Napalese city.

Trek along the Annapurna Circuit homestay route and see what village life is like for mountain communities. Or, take a day to hike to the Sarangkot Viewpoint where you’ll get to see some of the best panoramic views of Pokhara and the surrounding landscape.

For those with some extra cash, use an alternative mode of transport and paraglide back down at the end of some of these trails, and experience the skies of Pokhara too!

Further reading: How to trek responsibly when volunteering in Pokhara

To get to the World Peace Pagoda – also known as the Shanti Stupa – you can hop on a boat for around 1000 rupees return and watch the world pass you by as you glide along the waters of the Phewa Lake headed for Lumbini, a Buddhist pilgrimage site.

Lumbini is classified as a United Nations Educational, Scientific and Cultural Organisation (UNESCO) World Heritage Site and the structure symbolises the desire to unite humanity through peace.

Found sitting amoung the forested terrain, it’s a place where you can get in touch with nature and leave the city far behind.

And when you break through the thick of the forest, set out for the steps leading to the stupa itself and gaze at the intricate designs decorating this domed monument.

Then stop for a breather and appreciate the view of the city below. 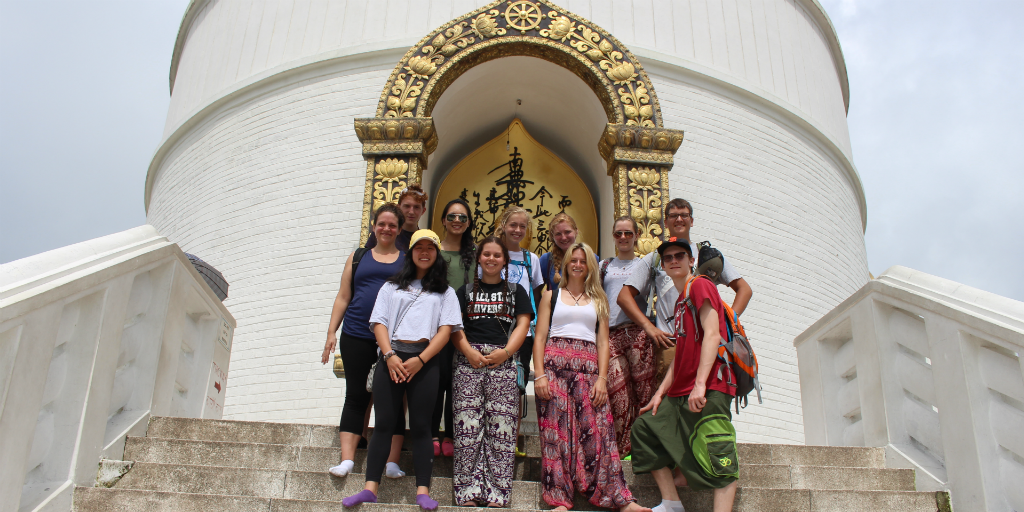 5) Adventure through the forest

Once you’ve absorbed the view, you can venture down the other side of the hill to view Devi Falls and visit the surrounding caves. It’s a good idea to check the water levels before you take the trip to make sure that you’ll be able to explore the caves with ease.

Or you could take some time to take in the forested surrounds. Clamber through the shrubs and trees for a chance to meet a monkey or two, and spy some of the other wild animals of Pokhara.

6) Spend some time at the lake

If the stint at Devi Falls has left you longing to take a dip then make your way to the shores of the Phewa Lake. Put on your hat, lay down your towel, and leave all your worries behind you while you unwind to the sounds of the water lapping the shore. Cool down by diving in and keep a lookout for the fish and other sea creatures that swim in the waters of Lake Phewa.

And if you start to feel peckish after your swim, there’s no need to let those stress levels spike. There are plenty of treats just a stone’s throw away from the shoreline. Hop over to a lakeside vendor for some fresh fruit or fruit juice, or take a few more steps and end up at the doors of one of the many lakeside bars or restaurants.

Dig into your meal with music from the surrounding bars floating through the air, then stay awhile and end your day watching the sunset light up the surface of Lake Phewa.

7) Get a glimpse into the past in Old Town 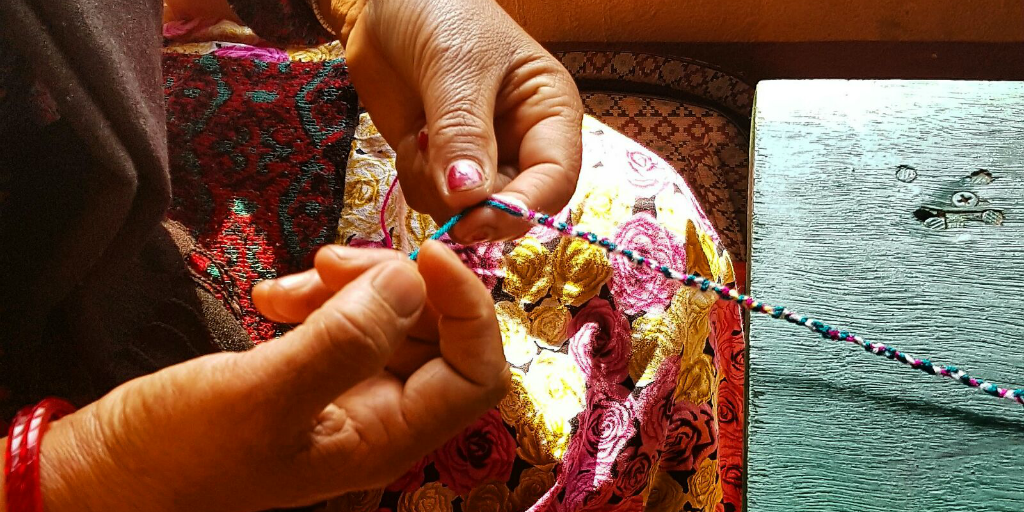 If you want to see what life in Pokhara was like before it became a tourist hub, Old Town is the best place to go. Here dusty alleyways zig-zag between mud-brown buildings, and the sounds of the city are left far behind.

The marketplace in Old Town is where you’d want to go to find traditional Nepalese fabrics, garments and crafts. And for as little as 100 rupees per metre, you can walk away with a ream or two of colourful fabrics to get a hand-tailored shirt or kurta made once you’re back in the city.

Since not all shops are open throughout the week, it’s best to check before travelling to Old Town. You should also brush up on your bartering skills since prices are negotiable for everything from taxi fares to tailor fees.

For an outdoor cinema experience situated in the quiet hills of Lakeside overlooking Lake Phewa, you’ll want to make your way to the Movie Garden.

Set down the blanket and cushions provided, and recline on the grassy slopes. Start up a conversation with your fellow cinema-goers and learn more about Nepal from other travellers or local people.

Once the movie begins, tuck into the local snacks you’ve brought along or make a dash for the concession stand. Enjoy the outdoor air, and – when your eyes aren’t fixed on the screen – let your view roll down the slopes and settle on the forest foliage all around.

9) Get swept up in the nightlife of Pokhara

For entertainment of a different kind, spend the night taking in the Pokhara nightlife scene! There are tons of places where you can dance the night away in this Nepalese city.

Shimmy your way down from one party scene to another, bump into old friends, or meet someone new and take in the music, lights, and laughter of the night club scene.

Here you’ll get to meet the young people of Pokhara and learn more about what life is like in this city. 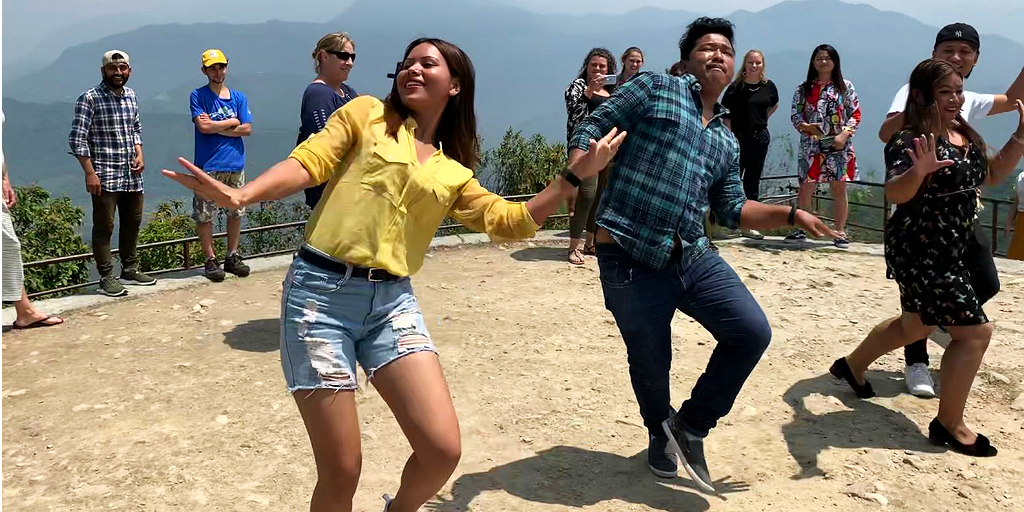 10)  See a Pokhara festival for yourself

And Pokhara isn’t just big on night-time festivities. Festivals are a big part of Pokhara’s culture and there are lots of festivals that take place during the year.

Holi – a Hindu festival celebrating the arrival of Spring – is one of the biggest festivals of the year. It’s also known as the festival of colour because part of the celebration includes people throwing coloured powder at each other.

Tourists are welcome to take part in certain aspects of Pokhara festivals – including the coloured-powder celebration during the Holi festival – and this means experiencing the city like never before!

Planning your trip to Pokhara so that you’ll be around for one of its festivals can add so many memorable moments to your travel experience and help you to see so much more of the culture of Nepal.

Your set with the top ten things to do as a tourist in Pokhara, but your trip can be so much more meaningful if you volunteer abroad.

Volunteers in Pokhara get to experience the culture and attractions of this Nepalese city while also contributing towards the well-being of its community.

Find out more about our volunteer programs in Nepal that can have you experiencing the top ten things to do in Pokhara while also making a positive contribution to global goals.