How to take photographs underwater responsibly 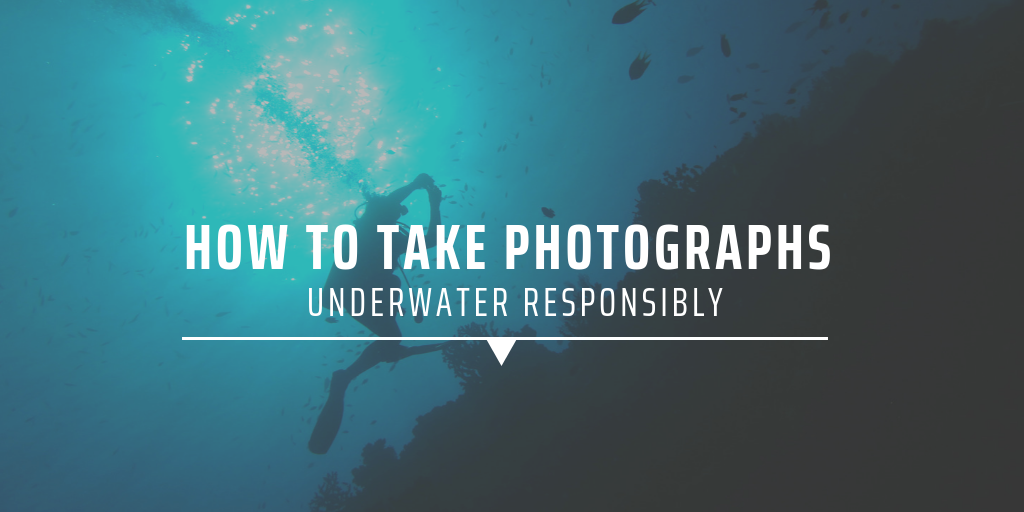 Underwater photography is more affordable and accessible than ever before.

But with so many budding new photographers descending underwater, what impact is it having on coral reefs, and are we photographing responsibly?

Not only is underwater photography a fascinating and rewarding pastime, it also plays an important role in marine conservation.

You may have heard the term “citizen science” before, but maybe you aren’t exactly sure what it means.

Depending on the subject, scientific research can take an enormous amount of time and often requires many people to collect and analyse data. Citizen science projects involve members of the public collecting data, photographing specimens, or even analysing data. This gives scientists more time to work with the data collected by members of the public.

One great example of how you can use underwater photography to become a citizen scientist is with manta rays and whale sharks.

Manta rays and whale sharks can be identified by unique markings on their bodies, just like our fingerprints. Projects such as MantaWatch or Wildbook for Whale Sharks allow you to upload your own images of these magnificent creatures to their respective databases, so they can be identified and tracked.

Divers are sharing their images of coral bleaching, plastic pollution, and habitat destruction across social media. This highlights the issues to people around the world – many of whom have never seen a coral reef first-hand.

Scientists are also using cameras to conduct research in a variety of ways. Slow-moving animals such as nudibranchs can be identified without having to be removed from the water (which can stress or harm the animal), and multiple images taken from the same location over a period of time can help monitor coral growth. The responsible use of light

One issue with underwater photography is the overuse of flash from either the camera itself, or large external flashes – known as strobes.

Water is extremely effective at absorbing light. As soon as you start descending, the water above will start absorbing light from the sun. This makes the coral reefs appear much darker and less colourful than you are used to seeing in photographs.

By the time you get ten metres underwater, red and orange have already disappeared, and once you reach 20 metres, almost everything appears either blue or green.

To bring back those vibrant colours that we are used to seeing, underwater photographers must bring a light source with them – which is where strobes come in to play. These high-powered external flashes are fired at the same time as the shutter button is pressed, illuminating the subject and showing the true colours of the animal or reef. The problem with strobes is that many of the animals being photographed are not used to bright light. With so little sunlight reaching the reef, they live in perpetual twilight. Their eyes have adapted to low light conditions, and the overuse of flash could daze them.

This doesn’t mean you shouldn’t use strobes. They are a great tool for enhancing your images and showing the world the beauty of coral reefs. The key is to use them sparingly.

One method used by many photographers is to prepare the camera settings and take a few test shots (ensuring colour balance and focus is correct), before moving onto the intended subject. A five shot limit per subject is recommended to avoid stressing the animal. Are you ready for underwater photography?

Diving has a steep learning curve. It can take many hours to master the fundamental skills of buoyancy control (the ability to maintain depth) and body positioning (keeping horizontal and having spatial awareness).

Many new divers struggle to maintain control of their buoyancy and body positioning when they descend underwater for the first few times. Almost all new divers experience this at first, so it’s nothing to worry about. What’s important at this stage is that they keep aware of their surroundings so they don’t crash into anything – potentially harming marine life or themselves. If a diver takes a camera with them before mastering the basics, they are likely to lose control of their buoyancy or positioning while trying to take a photo.

This could result in sinking to dangerous depths, floating to the surface, breaking delicate corals, or damaging the environment in other ways.

Before diving with a camera, a diver should be able to complete complex tasks underwater without losing control of their buoyancy – such as tying knots or writing on a slate.

Once buoyancy and body positioning have been perfected, not only will the diver feel infinitely more confident in the water, they will also take far better photos than someone who is not in control. GVI offers a number of programs related to marine conservation, and many of those include scuba diving as an important part of the program.

With any GVI programs involving scuba diving, there will always be an experienced PADI (Professional Association of Diving Instructors) instructor on hand to train you to dive in an environmentally responsible way.

It’s easy to get excited when you see something special underwater, especially if you have a camera in your hands.

Most divers are nature-lovers and would never dream of harming or stressing an animal. However, excitement can often get the better of us and make us act in a way we normally wouldn’t.

It’s not uncommon for divers to try and get as close to an animal as possible, which can cause the animal great stress. Some species, such as turtles, are tolerant of divers and will go about their business as normal. Once they get agitated, they will swim off. If the diver continues to bother them and chase them, they will be forced to flee.

A turtle will have no problem surviving off the reef for a few minutes. But for a smaller reef fish, leaving the safety of the reef could result in them being eaten. Underwater photographers love to photograph the smaller, more cryptic animals such as ghost pipefish or pygmy seahorses. These tiny fish have evolved to have amazing camouflage and spend their lives hidden from the dangers of the reef.

Should a diver stress them out and cause them to flee their homes, they will be extremely vulnerable to predation, and they have very little in the way of defence.

It is possible to get very close to an underwater animal without having to chase it.

To do so, the animal must understand that you are not a threat. This can be done by keeping a safe distance (two or three metres) for a few minutes, before slowly beginning to move towards it. Should the animal begin to turn its back on you, it means it is getting stressed and you must either back off and wait a little longer, or move on to the next subject.

When you move slowly and allow time for the animal to get used to your presence, you will cause significantly less stress to the animal, and you should be able to get the shot you want in only one or two takes.

Scuba diving is a fascinating activity, and underwater photography is a great way to share your underwater adventures with your friends and family.

If you are interested in gaining some PADI qualifications while undertaking a voluntary program, have a look at what marine conservation programs GVI has to offer. Just don’t forget to pack a camera!

Six reasons why teenage volunteering can be a great way to make friends
Read More
What you need to know about applying to college after a gap year
Read More
What does rhino conservation mean today?
Read More
Apply Now
Enquire Now
Call Back Request